"The problem is that it lists organised religions such as Christianity, Islam and Judaism in one group, while relegating less mainstream - but recognised and perfectly legal - faiths such as Wicca and Paganism to an "Alternative Spirituality/Occult" group. Rather oddly, it lists atheism both in the latter group and under Politics. And a company spokesperson couldn't explain what the difference is between "unconventional religious or quasireligious subjects" (listed under Religion) and " alternative religions" (listed as Alternative Spirituality/Occult)."

You can read a run-down of Bluecoat's filter categories, here. The dirty little secret of the web filtering business is that the categories are mostly cribbed from conservative Christian-backed programs and services. These programs are then sold to schools, libraries, and government institutions, which can lead to controversy and litigation once individuals realize the bias inherent in the filter. 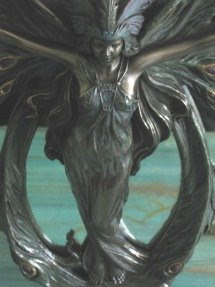 McAfee Office: This package contains a Guard Dog program which filters dangerous, pornographic, criminal and other Internet web sites. It contains a data base of words which it uses to compare against the text and Meta tags of web sites. It prevents viewing of web sites containing any of the following words: athame, Atlantis, book of shadows, Druid, magick, Neo-pagan, New Age, occult, pagan, pentagram, Wicca, etc. It appears to discriminate heavily against Neopagan web sites.
- August 08, 2008